Produced as a Limited Edition ironclad model of the famous USS Monitor, this museum-quality scale Civil War replica of the most influential and unique warship in history are certain to enthrall even the most discriminating naval historian or Civil War buff. Fine-craftsmanship and careful detailing combine to produce truly impressive model warships that are ideal for display upon any shelf, table or desk. 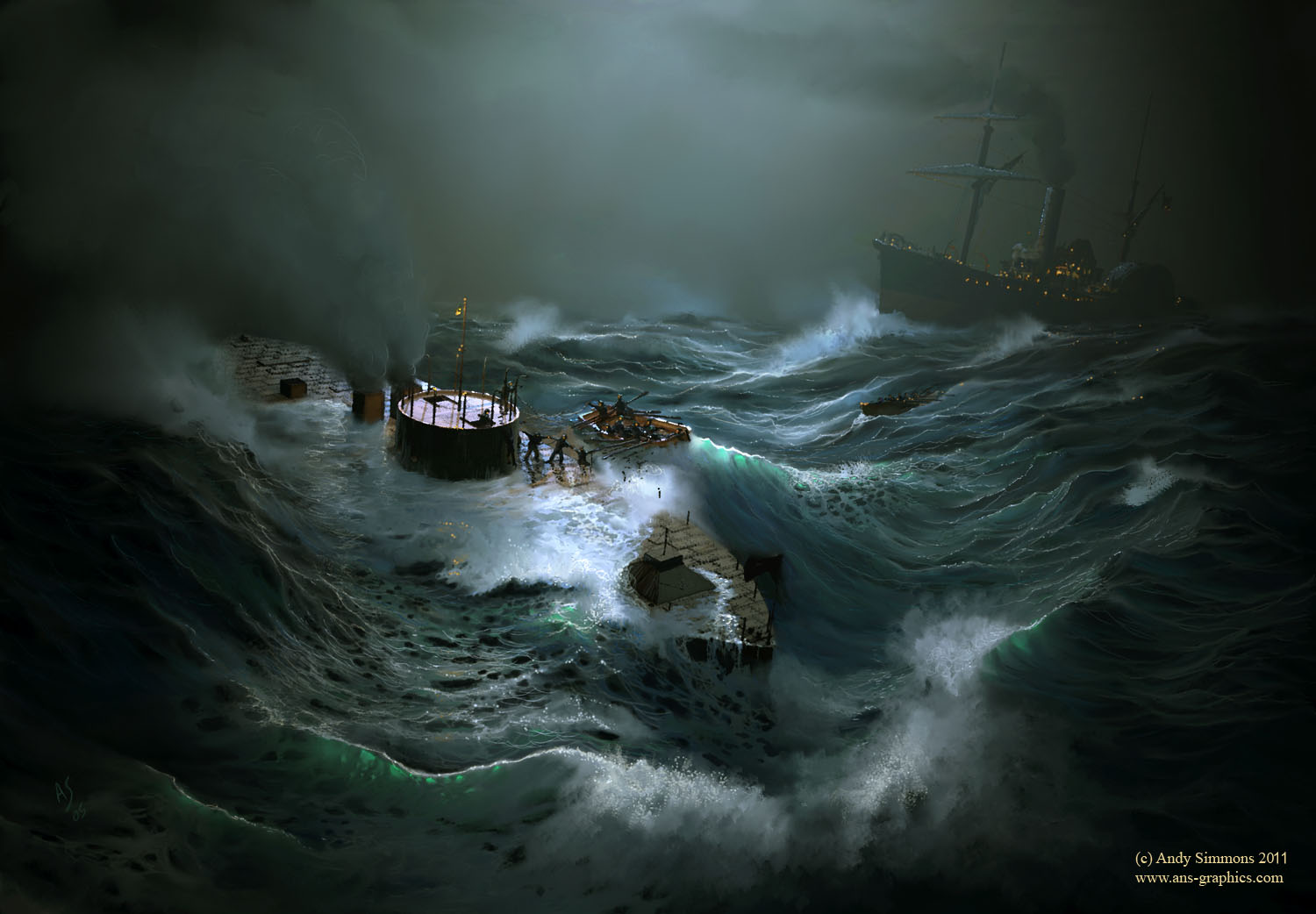 In the 1860s America was divided in two by the Civil War, North and South fighting for supremacy, and the iron-clad warship emerged as a new tactic in naval warfare. In the North the Iron Clad Board was established, placing three senior naval officers in charge of finding a workable design for the Union’s first foray into the construction of such a ship. On August 3, 1861 Union Secretary of Navy Gideon Welles published an announcement requesting designs for iron-clad vessels. Out of 17 proposed designs the USS Galena, submitted by Cornelius Bushnell, was chosen as the primary candidate. Requesting advice from renowned engineer and inventor John Ericsson Bushnell showed him the design, after which Ericsson displayed his own iron-clad design. Originally drafted and proposed to Napoleon III in 1854, Ericsson’s design was recognized by Bushnell as far superior and he convinced Ericsson to submit it to the Iron Clad Board. Though initially rejected, the design featuring screw propellers, heavy iron plating, a rotating turret, and relying exclusively on steam power was eventually accepted and Ericsson was given a 100 day deadline for completion.
As the Union had known of the Confederate CSS Virginia since the summer of 1861, and the existing navy had no answer for her, it became imperative to launch Ericsson’s ship immediately. To achieve this feat in the timeframe given, Ericsson subcontracted the ship’s fabrication to eight separate foundries throughout New York and Maryland. Each piece was shipped to Continental Iron Works for assembly, and the USS Monitor was launched in Brooklyn on January 30, 1862, surprisingly only 18 days overdue. The first iron-clad war ship of the Union Navy, the Monitor emerged at 172 feet long and sat incredibly low to the water, with only 18 inches of deck above the waterline; the bulk of the ship, including the entire hull, completely submerged. Atop the hull was an overhanging armored deck, complete with an armored belt draped over the edge, protecting any exposed areas between deck and waterline.
Sitting so low, and completely covered in iron plating, the Monitor was not just a well protected vessel but a difficult target for Confederate ships to hit. In addition to the heavy armament, for offensive purposes a large, round rotating turret was erected on the deck, completed with twin 11” Dahlgren guns. Powered by its own steam engine, the first turret capable of rotating allowed for a distinct strategic advantage over other ships of the era; while Confederate ships had to steer into firing position in order to aim their cannons, the Monitor was able to fire on locations independent of where she sailed. The Dahlgren guns, though only a pair, could be aimed quickly and were capable of firing solid shot weighing up to 180 pounds, which more than made up for the lack of cannon banks. With such firepower, and wrapped in eight layers of inch-thick armor with a ninth plate-layer on the interior, the turret was a practically impenetrable machine of war.

On March 8, 1862 the Confederacy’s first iron clad warship, the CSS Virginia, engaged Union ships off the Virginia coast at Hampton Roads. After sailing out with the CSS Beaufort and CSS Raleigh, the Virginia turned to engage the USS Cumberland, USS Congress, and USS Minnesota. Exchanging fire with the USS Congress, the Virginia made a run at the Cumberland, using her solid bow ram to quickly sink the Union vessel. At this same time the Minnesota ran aground and the Virginia turned her attention to shelling the Congress with white hot shot, burning it down as it sank. Moving on to the Minnesota, the Virginia inflicted what damage it could before tides forced her to relent for the night. Throughout the day the Union was hastily moving the Monitor from its port in New York to aid the vessels in Hampton Roads. So pressing was the emergency that final fittings and additions to the Monitor were done by labor crews on board as she was being towed down the eastern seaboard by the USS Seth Low. 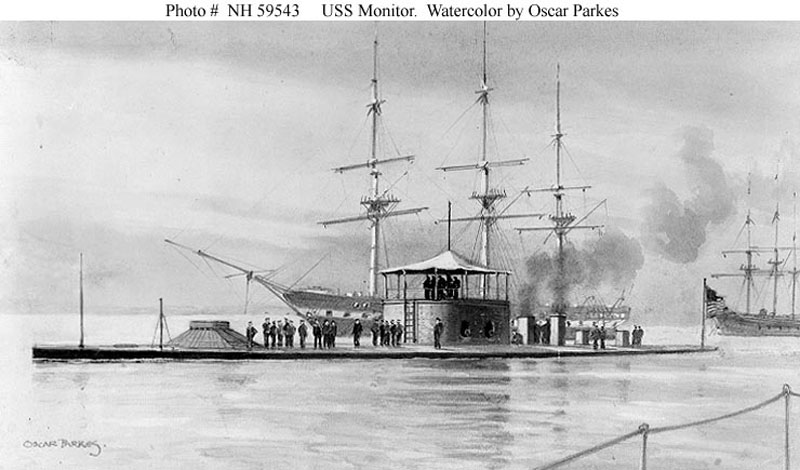 Arriving in Hampton Roads at 9:00 pm on March 8, the Monitor was instructed to protect the Minnesota and anchored near the damaged ship. Early the next morning the Monitor would engage the Virginia in what would become a legendary and revolutionary naval battle. A little after daybreak the Virginia began to fire on the Minnesota, forcing the Monitor to advance into battle. After entering into a firefight the crew of the Virginia realized their artillery was not damaging the Monitor and moved to continue shelling the Minnesota. Once again the Monitor moved to intercept and the two ships began circling as they attempted to ram one another. Though the two ships attacked with all firepower available, neither vessel suffered much damage. The Virginia had lost her ram during the battle of the previous day, and the Monitor’s pilothouse was struck by a shell, yet both ships were practically intact. After almost five hours, with no discernable winner to be declared, the Virginia broke off to head up the Elizabeth River while the Monitor remained with the Minnesota.
Following the revolutionary battle both Union and the Confederacy realized the might of the new iron-clad ships and began to implement plans to produce more. Though the Monitor and Virginia only met once more, on May 8, near Sewell’s Point, Virginia, and though no battle was initiated, the advantages of iron-clad ships had been thoroughly demonstrated to both sides. Three days after the battle the Virginia was scuttled as Union forces once again overtook Norfolk and the Naval Yard, yet the legacy of the battle ensured the continued evolution and construction of armored and steam powered vessels.

USS Monitor Meets an Untimely End: though her legacy remains

Following the historic battle with the CSS Virginia, the Monitor assisted in General McClellan’s further campaign in Virginia, though without much success. Later that year she began her voyage back up the Eastern seaboard to Rhode Island.  While being towed stormy weather began to raise the seas, and with her added weight the Monitor began to cut through the waves rather than sail atop them. On December 31, 1862, after being barraged by waves and inundated with cold Atlantic water, she was sunk off the coast of Cape Hatteras, North Carolina. While her low profile and heavily armored design made her ideal for port and river warfare, in high seas these same attributes worked to a terrible disadvantage. The Monitor was pulled under, taking 16 unfortunate crewmen with her, not to be discovered until 1973. Now a designated ocean preserve site, the Monitor National Marine Sanctuary is managed by the National Oceanic and Atmospheric Administration, which promotes both the history and continued educational use of the legendary ship.
Though this glorious ship met an untimely and unfortunate demise, the USS Monitor forever changed naval warfare along with her southern counterpart the CSS Virginia. The success of these two ships lead both North and South to implement plans and designs for further develop iron vessels of war; those earliest models eventually evolving into the massive warships that sail the seas today. Taking design concepts from both ships more modern versions were created, with advances made during the Second Industrial Revolution allowing for ever improved armor and plating. In addition to armor becoming standard, the steam engine came to the forefront of ship design. As the first naval vessel powered solely by steam engine, the Monitor was the herald of the end of the age of sail. With respects to weapon technology, the Monitor also demonstrated the capability and effectiveness of having movable guns emplacements, yet another design that was adopted for future ships. With so many important innovations in ship building, the USS Monitor was a complete revolution in both naval tactics and battle, and sailing in general. A true masterpiece of engineering, though she only had a short life, the Monitor will forever live on in history.