Since 1954, Handcrafted Model Ships guarantees the lowest price, the highest quality and a 100% money back guarantee on United States Coast Guard.

Decorate your home, or give as a gift to someone special our large selection of United States Coast Guard.

Shop with confidence and showcase your passion for United States Coast Guard with fast and free shipping on orders over $99! 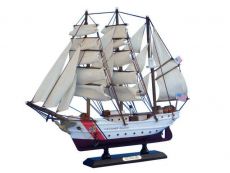 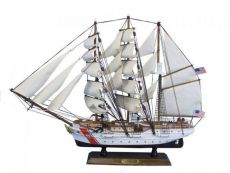 Warships from the Age of Sail

From classic sail boats to stunning contemporary designs, Coast Guard ships patrol our seas and protect our country at great risk to the brave sailors that man their decks. With stunning museum quality replicas, from the 18 National Security Cutter to the historic and legendary USCG Eagle, Handcrafted Model Ships is proud to honor our servicemen with these fine models.

All of our US Coast Guard ship models are sized for proud display upon a desk, mantle or shelf. Most are sized from 14 to 21, making them ideal and affordable gifts for a child with a parent serving in the Coast Guard, an officer or sailor currently active aboard such a vessel, or as a retirement present after a long career serving at sea.

Many of our US Coast Guard boat models are available with a choice of nameplates in order to match the precise boat aboard which the recipient served.

The United States Coast Guard (USCG) proudly serves many seaborne missions for the United States and frequently other nations, helping maintain maritime domestic security and law enforcement as well as engaging in search and rescue operations. Additionally, the Coast Guard is active in marine environmental protection and the maintenance of navigational aids upon U.S. rivers, waterways and coasts.

Handcrafted Models Ships is extremely proud to salute the duty and patriotism of the men and women of the U.S. Coast Guard with a line of models dedicated to honoring their efforts. We offer 10 different models of currently-active Coast Guard vessels covering a variety of roles and missions, from training to patrol to rescue.

All of our US Coast Guard ship models are sized for proud display upon a desk, mantle or shelf. Most are sized from 14 to 21, making them ideal and affordable gifts for a child with a parent serving in the Coast Guard, an officer or sailor currently active aboard such a vessel, or as a retirement present after a long career serving at sea.

The modern United States Coast Guard (USCG) was formed in 1915 from the union of the Revolutionary-era United States Revenue Cutter Service (see also our Civil War replica of the USRCS Harriett Lane) and the United States Life-Saving Service. In 1939 the Coast Guard gained the responsibilities of the U.S. Lighthouse Service and absorbed the Bureau of Marine Inspection and Navigation in 1942, bringing the duties and mission portfolio of the Coast Guard into its modern form.

Our premier and flagship U.S. Coast Guard model is the USCG Eagle. Available in three sizes from 14 to 28, the Eagle is a fine tall ship that is used by the Coast Guard for officer training. She was originally a German ship taken as reparations after World War II, and now serves as a training ship and goodwill ambassador for the United States. Our two smaller models make excellent and affordable gifts, while the larger tall model ship version of the USCG Eagle is a fine-crafted edition worthy of proud display in the home, den or office of any Coast Guard officer, sailor or family.

Four Coast Guard model boats represent the highly visible and well-known Patrol and Law Enforcement mission of the Coast Guard. These are the National Security Cutter, which is capable of engaging in combat and international anti-piracy roles as well as domestic coastal patrol, and the High Endurance Cutter which serves as the primary class of vessels for enforcement of laws and treaties as well as search-and-rescue (SAR) on the high seas. Similar missions care also tasked to the somewhat smaller Medium Endurance Cutter