Since 1954, Handcrafted Model Ships guarantees the lowest price, the highest quality and a 100% money back guarantee on Civil War Ships.

Decorate your home, or give as a gift to someone special our large selection of Civil War Ships.

Shop with confidence and showcase your passion for Civil War Ships with fast and free shipping on orders over $99! 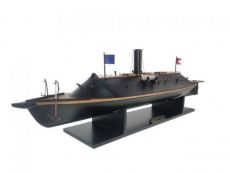 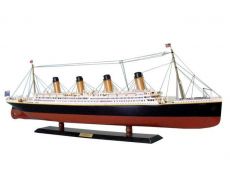 From Movies And Television 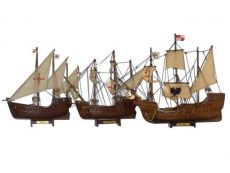 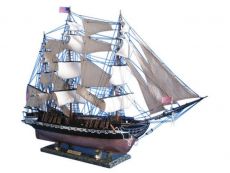 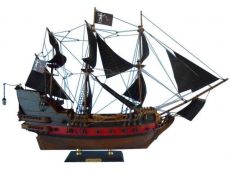 Remarkable vessels of destructive power and military might, often outfitted with some of the latest technological advancements, these ships of the Civil War came to be known throughout the world. With museum quality replicas from the USS Monitor to the CSS Alabama, Handcrafted Model Ships has the perfect Civil War Ship for you.

Handcrafted Model Ships is proud to offer nine Civil War replicas and ironclad model ships that celebrate this exciting transitional period in nautical development. Among the most famous and innovative are the USS Monitor, which ushered in the modern turreted battleship; the CSS Hunley, the first combat submarine to sink an enemy warship; and, the CSS Virginia, iron-clad foe and nemesis of the USS Monitor in her most famous naval duel.

Both highly-detailed and fine-crafted Standard versions as well as museum-quality Limited Editions of these models are available from Handcrafted Model Ships.

Occurring at a crossroads of technological development, our Civil War replicas offer broad appeal to a wide variety of enthusiasts and collectors, as well as anyone generally interested in technology or engineering and specifically in naval history. Even fans of traditional tall ship models will be impressed with the craftsmanship and detailing of the steam-assisted ships while Civil War buffs are sure to relish the ironclad models. These ships are ideally sized for display upon a shelf or desk, perhaps in an office or den, to be shared and enjoyed with visitors and guests. Upon a display shelf or perhaps encased, any of these models would make a marvelous centerpiece for a collection of Civil War antiques as well as a highlight of any broader collection of nautical artifacts or celebrations of technology, engineering and innovation.

All of these Civil War replicas and model warships offered by Handcrafted Model Ships were built during the American Civil War, and thus represent the pinnacle of engineering design and technological development of their day. While the initial period of the Industrial Revolution was by now complete, a so-called Second Industrial Revolution or Technological Revolution was just beginning. With advances in factory production and high-powered steam engines leading the way to a host of new technological innovations, these vessels represent novel, occasionally experimental and generally transitional designs at the turning point of traditional sailing ships into modern, self-powered warships.

The oldest of the ships is the Harriet Lane, a paddle-wheel sailing ship built in 1857, just prior to the Civil War. In the Revenue Cutter Service (a tariff enforcing precursory to the United States Coast Guard), she was quickly embroiled in the outbreak of the Civil War when she was dispatched as a re-supply ship during the Siege of Fort Sumter, during which she fired the first naval shots of the Civil War. Later, she was involved in the first significant combined amphibious operation of the war against blockade runners and their supporting forts in the Outer Banks of North Carolina. Throughout the war, the Harriet Lane was involved in numerous other engagements.

Although ships such as the Harriet Lane, the USS Kearsarge and CSS Alabama were provided with steam-powered locomotion, during this period their early steam engines were still not powerful enough to propel them faster than the speed they could make under full sail. Ocean-going ships thus remained primarily traditional sailing tall ships, using their steam engine to augment their sails as well as to provide reliable, if low-speed, propulsion in becalmed seas, areas of restricted navigation and maneuverability such as inland waterways where they could not tack widely to catch favorable winds, or when traveling upwind.

The USS Kearsarge and CSS Alabama represented a slightly different and entirely naval ship design than the Harriet Lane. Whereas the revenue cutter featured a pair of large paddle-wheels along her sides, these exposed side-wheels were a severe liability for a warship since they could be easily targeted and disabled by enemy shot, rendering the ship helpless. The two navy ships instead belonged to a class known as the screw-sloop-of-war which featured an entirely submerged propeller located astern, thus largely protecting it from danger.

Built secretly in England, the CSS Alabama was launched upon a career as a commerce raider in both the Eastern and Western Atlantic. During two years of service she completed seven expeditionary raids against Union shipping, boarding nearly 450 vessels and capturing or burning 65 merchant ships while taking more than 2,000 prisoners that were later released to friendly or neutral ships and ports, all accomplished without the loss of a single life among either prisoners or her own crew.

On 19 June 1864 the CSS Alabama sailed out of the harbor in Cherbourg, France where she had been blockaded by the screw-sloop-of-war USS Kearsarge in order to engage her adversary. The Union warship had been hurriedly built following the outbreak of the war, and was specifically tasked with hunting Confederate commerce-raiders operating in European waters. One of her early victories included the blockade and defeat of the CSS Sumter at Gibraltar in December of 1862, and it was Sumters captain who fled to England in order to commission the new CSS Alabama.

The USS Kearsarge spent months tracking the CSS Alabama, finally catching her docked at Cherbourg undergoing repairs and resupply. Because France was a neutral country, the warships withdrew to international waters to commence their duel. Circling in a total of seven spirals attempting to gain the advantage of raking fire across her opponents bow, each ship continued a deadly barrage with their deck-mounted pivot-cannons. Finally, the USS Kearsarge, recently upgraded with additional protection to her mid-section hull to protect her steam engine and machinery, emerged victorious and rescued the survivors of the surrendered CSS Alabama as the battered ship proceeded to sink.

Across the Atlantic, the Confederate Navy was also building warships for protection of its home ports and direct action against Union warships. When retreating Northern forces failed to completely burn the scuttled USS Merrimack, the Confederates were able to recover the intact hull and machinery below the waterline. This stroke of good-fortune allowed them to rebuild the vessel as a casemate ironclad, essentially placing an iron cap across the vessel at the waterline above which stood a bunker-like superstructure and gun-battery. Sailing out of her reconstruction, the CSS Virginia was an unstoppable terror against the initial wooden-hulled warships unfortunate enough to face her. However, before she could exit the mouth of the James River and ply coastal waters to wreck havoc upon the Union Navy, the CSS Virginia met her match.

Unquestionably the most famous ship of the Civil War was the USS Monitor, which was not only the first ironclad warship commissioned by the United States Navy, but featured several novel technological innovations, including a hull that was predominantly submerged for protection as well as the protection of her gun batteries within a rotating armored turret. Learning of the capture of the Merrimack and construction of the Virginia, the US Navy quickly rushed into production on an ironclad of their own which might hope to defeat her.

The USS Monitor, like the Virginia, was entirely steam-driven as she rushed to Hampton Roads to blockade her rival. However, the engines on the Merrimack were old and under-powered for their day and due to be replaced even before the Confederates captured them. Combined with her heavy casemate armor and damage to her smokestack in earlier engagements, the CSS Virginia found her speed and maneuverability severely limited. Conversely, the nimble USS Monitor danced around the southern behemoth, bringing her turret to bear from any angle as the Virginia struggled to turn herself to deliver a traditional broadside.

Ultimately, the Battle of Hampton Roads turned into a stalemate. The Virginia could not deal sufficient or accurate damage to the small and maneuverable Monitor, while the turreted warships cannonballs bounced harmlessly off the angled bunker armor of the casemate ironclad. At the end of the day both retreated, and though they had participated in historys first even naval battle between ironclads, neither warship would fight again. As Union forces advanced on Norfolk the CSS Virginia attempted to retreat up the James River but became grounded and was ordered blown up to prevent her capture. Meanwhile, relieved by other newly-arrived ironclads, the USS Monitor withdrew. Months later, handicapped by her low but top-heavy design, she foundered in a storm off Cape Hatteras, North Carolina and was lost.

Less know and yet perhaps the most unique of the vessels represented among our Civil War replicas is the CSS Hunley. Unlike other ships of her day which were partially or entirely powered by steam-engines, the Hunley relied on a man-cranked screw for propulsion. But the Hunley was also unlike other warships of her day because she was a submarine, and the first every to sink an enemy ship in combat.

Crewed by eight daring sailors, the CSS Hunley (also known as the H. L. Hunley, after her inventor and builder) mounted a type of bomb known as a spar torpedo on the end of a long pole attached to her bow. Whether submerged or running just on the surface, she could harpoon enemy ships below their waterline where even most ironclads were still constructed of wood, then back away in order to detonate the charge and breach the enemys hull to sink her.

Using this very method, the CSS Hunley approached the USS Housatonic, which was on station blockading Charleston harbor in South Carolina. They successfully embedded their torpedo in Housatonics hull and then retreated, with the subsequent detonation sending the Union warship to the bottom within five minutes. Though there is some evidence that the Hunley retreated safely from the attack and even signaled her success to waiting comrades ashore, the novel submarine never reached her berth and remained lost mysteriously at sea. Her location was finally discovered in 1970 and confirmed in 1995, and she was raised for burial of her dead and archeological study in 2000.

Taken together, these Civil War replicas and ironclad models offered by Handcrafted Model Ships represent a cross section of the fascinating technological developments being made in naval warfare during this important transitional period in maritime history.